Potbelly pigs make amazing house pets and companion animals. They are very intelligent, so training pigs to do tricks, adjust behavior, or use a litter box indoors is a relatively easy task. Since they are food motivated, using positive reinforcement with veggies as treats is a great way to train a pig. 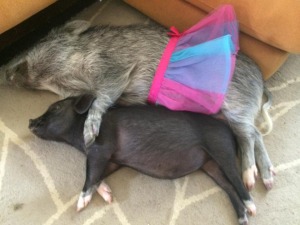 Here are some other fun facts you may not be aware of with potbelly pigs: