At Hog Haven Farm, we get asked a lot of questions. Sure, it isn’t every day you meet people who are determined to do everything they can to support, rescue, educate and service the community with potbellied pigs. Many of the questions we are asked are centered around the bathroom habits of pigs–and the rest comparing pigs to dogs. People need a reference point to understand the connection of pigs as pets–and here is the answer to our most frequently asked question: Why Pigs?

Let’s talk first about the concept of keeping domesticated animals as companions–i.e. pets–in our homes. Psychological studies over the last decade have agreed that there are both physical and psychological benefits of maintaining a human-animal relationship. Research suggests that keeping a pet can reduce stress, lower heart rate and blood pressure, reduce depression, loneliness and isolation, and increase social interactions and connections with those who have similar pets. Whether it be a typical household pet–such as a dog, cat, or bird–or an exotic pet, the bond between humans and companion animals is undeniable. 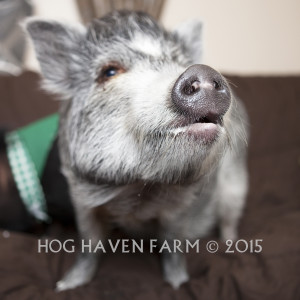 Ever since I was a child, probably 5 or 6 years old, I’ve loved pigs. There was something in their eyes and mannerisms I was drawn to; I cannot to this day explain the connection I felt. Perhaps it was the intelligence behind their eyes. Though no one I knew had a pet pig, in my heart I knew that someday I would. That happened when I was 28 years old. My husband knew that my love for pigs was real, and decided we could try our hand at pig ownership.

This simple step changed my life. Words are hard to find when trying to convey the absolute joy having a pet pig is–perhaps the best way to describe my pet pig is the bond we share. Pigs, by nature, are not social creatures. They are, however, herd animals, and form the same attachments to one another that we may form with our families or our own children–and those attachments can be shared with humans. So once pigs accept their human companions as part of their herd, an unbreakable bond is created. 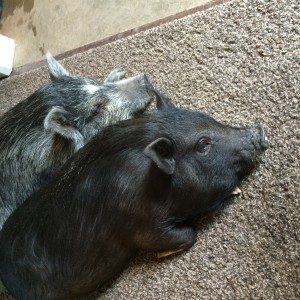 When Andrew and I brought Pipsqueak home, she was 15lbs and 4 months old. She was initially shy, but after a couple of days she really warmed up to us. Pipsqueak–whom we now call Pippy–was affectionate, adorable, and had funny little quirks. Pippy loved to root, so we made a root box for her in the yard. Her tail wags were so cute–and belly rubs really won her over! Pippy took to training really well; we were able to litter box train her in 24 hours, and she slept through the night in her crate.

After only a few months with Pippy, it became apparent to us that pigs are not only intelligent, but have empathy, compassion, and deeper feelings that we’ve usually considered uniquely human. We decided it may be better for Pippy to have another pig in the house, so we picked Boris up right before Christmas. It was the best decision we could make; the pigs bonded together and became best friends. Seeing Pippy and Boris interact with each other was amazing. They snuggle together, graze together, and are inseparable. They also seem to have their own ways of communicating with each other, with a variety of sounds and mannerisms.

The bond I share with the pigs is of mutual love and respect, which non-pig owners consider silly or crazy. However, you never understand such a bond until you have it, thus our reasons to educate the larger public about how awesome pigs are as pets. 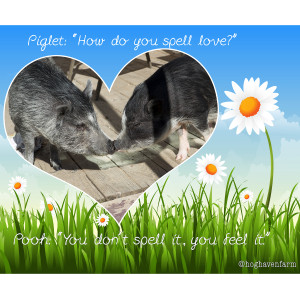 As a couple, Andrew and I are not interested in having children. The closest comparison I can make to having pigs in my life is to equate them to the joy and love a mother feels towards her children–while the pigs can be frustrating, they are the loves of my life. They love routine, and become cranky if that routine is broken. They are sometimes playful, and each has their own personality.

Three pigs in, Andrew and I have decided we want to do everything we can to help other pig families, pigs in need, and use the pigs as therapy pets. Because they are an uncommon pet, the pigs bring a lot of smiles to the residents in assisted living and memory care facilities. Residents love to pet the pigs, feed them snacks, watch them perform tricks, and ask me loads of questions. Seeing the joy these piggies bring makes my heart full–and reaffirms my love for these amazing creatures, and my need to do more. 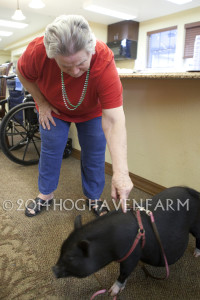 As a side note, we would like to mention that pet pigs are not for everyone. While they are cute, cuddly, and affectionate, they are incredibly smart–which means they can be a handful and require proper training and time. But that is a conversation for a later blog post.